On October 13th, Kurdistan’s Peshmerga Forces
went under attack by the Iranian-backed Shia militias near Kirkuk

​& I don’t call my father. I don’t ask anyone in my family about a nation or serving or betrayal or if my family’s family, the blood of my blood, is getting attacked. I follow Sozan’s tweets. I read more on Barzani. I never say his first name. I think of the live uncles my dad hides from me, & I know they are probably drinking vodka like real Kurds, screaming, without understanding that the smoke won’t leave after sleep, at least in Kurdish, the sons fighting & forgetting, the language not learned in Turkey, the no-religion until. Hiding, too. My father used to hate silently, and now, can’t ignore that maybe, he has something, other than death & a nothing & moving land & killing, somewhere to put his anger, releasing the word Iran from his mouth, no longer prisoning it as a way to get back. I don’t actually talk to any of my friends about the politics. I know too much in simple words, we gave up our division and when we finally got to hold the land, we let [               ] fight what hurt us. We swallowed the drone & gave it right back / let it birth another. I don’t have any Kurdish friends, meaning, if I don’t talk about this, no one will know. My friends hear me say Kurdistan and I get rid of the word resistance. I have no one to tell, we’re feeding a weapon, and [               ] killing for us. The only thing I know of the mountains is that when I get there, the sun disappears. I can barely pronounce Kirkuk. I don’t know anything about oil. Or the difference between Shia and Sunni. I don’t know the geography of Iraq. I want to hold all of the world and tell my father I put the flag in my room. But I can’t bring it to our home. I see how quiet I get, when I can’t say peshmerga and mean jihad, still be scared of death & not God. We close one airport & then, their city’s streets & I try hard to feel the itch of anger Sozan tweets with, the way she possesses a nationhood before declaration, Iraq, we will never forget this & born in war, die in war. I can only think that my last name is not Barzani, and barely Baban, and really, if I don’t think too hard that people are dying still, anyway, even though we did bring what barely breathes as defense, no one has to know. If I don’t pledge allegiance to my identity, I don’t betray my                 name, or the incomplete flesh of my flesh, or the distant family & the nothing / moving land still patient against the rush & burning massacre.
The title of this poem is derived from a since-deleted tweet in a conversation about the attack detailed above. It is unclear if the quoted material was original to the tweeter, a reporter for a Kurdish media company, or the company itself. 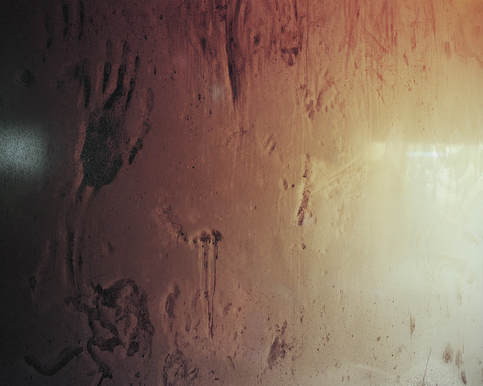 Hajjar Baban is a Pakistan-born, Afghan Kurdish poet. She is currently the 2017 Detroit Youth Poet Laureate and a First Wave Scholar at the University of Wisconsin - Madison. She spends most of her time avoiding running from herself.
Carolyn Benedict Fraser is a Lecturer in Photography at Ithaca College. Her work utilizes the constraints of the camera, the frame, and vision to address the ways in which we orient ourselves to mental and physical limitations. She studied psychology and photography at Mills College and received an MFA in Visual Art from Cornell University. Fraser spoke at the 2017 Northeast Chapter SPE Conference, Is Photography Enough?: Interdisciplinary Approaches Beyond the Still Image. Recently her work has been exhibited in New York City, San Francisco, and Brattleboro, Vermont, and was included in the Humble Arts Foundation of New York exhibition, On Beauty. Her website is www.carolynbenedict.com.
Next