renderings (My Father as icarus)

A Craft Essay
I was four when blood flooded my father’s skull.

Today, only half his body works. His boats are dry-rotting in his yard.

I drive him to the lake when I visit. All he does is stare, as if waiting.

Miles away, the Atlantic is crashing.

I think the lake is also waiting.

He describes the day of his stroke as the day he fell out.

The most obvious theme in Bruegel’s Landscape with the Fall of Icarus is neglect. Icarus’s flailing legs are an afterthought; if his name weren’t in the title, you’d probably never notice him. The lowly ploughman is a tower in the foreground, so large you could think the painting was about him.

The indifferent fisherman on the shore is a sort of stand-in for the viewer: either apathetic or unaware, he goes about living, suggesting our lack of empathy for the suffering of others, that we can be too caught up in our small lives to notice even the most spectacular plights of others.

Or, maybe not suffering so much as completion.

My father lives as geographically far from the ocean as you can be in a state that is practically an island. The ocean has become a story, an echo in the ear.

In the stroke’s wake, stories have become a kind of default language for him, the past a kind of metaphor he’s trained his tongue to relate when his mouth can’t form the words he’s thinking in the moment. These stories are always about him — or rather the he he was before the stroke, as if he could speak that man back into being.

He once told me he’d always wanted two tattoos: a ship on one arm and a compass on the other, so he could always make it home.

His mouth is always dry.

Icarus would have no myth without his fall. No one would know his name if his story were about the impressive ingenuity of the desperate or the resilience of the human spirit.

But his failure to arrive home was at least a successful departure from his prison, which was itself a freedom. In the poem “Failing and Flying,” Jack Gilbert uses this aspect of the tale as a conceit for a broken relationship. The speaker closes, “I believe Icarus was not failing as he fell, / but just coming to the end of his triumph.”

When I visit, my father tells me repeatedly that he’s nearly healed, and that when God is finished healing him, he’ll get his driver’s license back, get his boats fixed, go to the ocean. My sisters and I know this is the fiction that makes living bearable, that the facts of his past compose his body’s mythology. 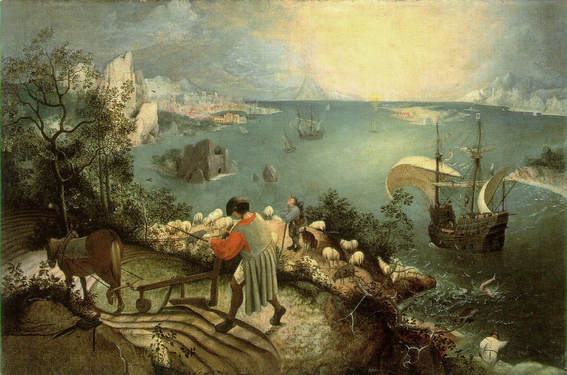 From William Carlos Williams’s take on Landscape, a poem by the same name as the painting:

… the sun
that melted
the wings’ wax

unsignificantly
off the coast
there was

a splash quite unnoticed
this was
Icarus drowning

Where Gilbert argues what’s important about Icarus is that he tried (“anything / worth doing is worth doing badly”), Williams seems to argue that nothing in the story is really that important in the context of our lives.

For over two decades, my father has felt he exists in a body on the verge of change, like ice floating on a surface still too cold to melt it.

When I take him to the lake, he stays in his truck. For him, water is a reminder of limitation and a source of optimism. For Icarus, it was also an ending waiting for a story.

What killed Icarus, the sun or the sea?

My sisters lead my semi-conscious father to the living room floor, where I try to coax him into playing with me. I’d tied a blanket to my neck, draped it behind me like a cape.

W. H. Auden suggests in “Musée des Beaux Arts” that the participants in Landscape weren’t too busy to notice Icarus; they just chose to ignore him:

In Breughel’s Icarus, for instance: how everything turns away
Quite leisurely from the disaster; the ploughman may
Have heard the splash, the forsaken cry,
But for him it was not an important failure; the sun shone
As it had to on the white legs disappearing into the green
Water …

Are we indifferent, ignorant, or falling?

Water itself was escape for my father, restless in a house where four children and a wife awaited him.

My whole life he’s worn his wedding band next to an anchor pendant on a gold chain that never leaves his neck.

If he was a martyr to failure, the art immortalizing him is both celebration and elegy. He flew like a god and was buried in waves, and we still recreate his sinking on canvas, cast ourselves in his tragedy, cradle the bones of him in our mouths.

Bruegel, Pieter. Landscape with the Fall of Icarus. The British Library.

Williams, William Carlos. “Landscape with the Fall of Icarus.” Academy of American Poets.
Bryce Emley is the author of the chapbook Smoke and Glass (Folded Word, 2018), and his poetry and prose can be found in The Atlantic, Narrative, Boston Review, Prairie Schooner, Best American Experimental Writing, etc. He works in marketing at the University of New Mexico Press and is Poetry Editor of Raleigh Review. Read more at bryceemley.com.
Back
Issue ten