The light there:
a found scene, high seat
at the Monday organ, sunbeams
captive in the stained glass.

A draft passes chimney
to living room. Ghost air.
We are insulated from everything
and nothing at all.

My timid steps on a winter pond:
a fissured trajectory.
What else fails to hold?

We dress heavy,
answer the weather.
Our bodies, like dumplings,
float in a pale broth. 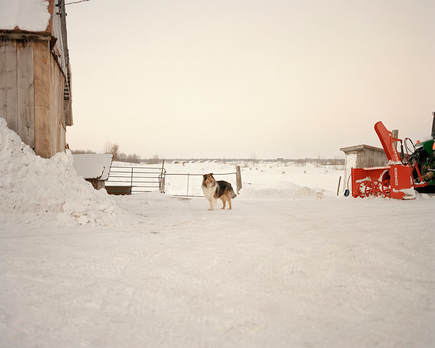 Allison Hraban’s poems have been published in Third Coast, Sugar House Review, Salamander, The Chattahoochee Review, Crab Orchard Review, The Flat Water Stirs: An Anthology of Emerging Nebraska Poets, Ruminate, and others. She received an MFA in 2017 from Creighton University where she was a full-fellow and associate poetry editor for Blue River literary journal. One of her poems was a 2016 Pushcart Prize nominee. Allison currently lives and teaches in Lincoln, Nebraska.
Laurence Hervieux-Gosselin was born in Montreal, Quebec. She studied scriptwriting and communications at Université du Québec à Montréal and has a BFA in Photography from Concordia University. She is currently an MFA candidate in Art Photography in the College of Visual and Performing Arts at Syracuse University. In 2018, she was a finalist for the Scotiabank New Generation Photography Award, and in 2014, she was a finalist for the Ideastap Photographic Award with Magnum Photos. Her work has been exhibited at Uqbar (Berlin, 2018), La Castiglione (Montreal, 2018), Burrard Arts Foundation (Vancouver, 2017), Monash Gallery of Art (Melbourne, 2017), dnj Gallery (Santa Monica, 2016), and The Old Truman Brewery (London, 2014).
Issue ten