like sky lit moon,   if it didn’t feel so good we wouldn’t eat so much of it:
the sugar, the sex. we wouldn’t have

waiting on a credible news source  to confirm reports of the recent extinction
of the unicorn race.   a week ago it was reported

the last cowboy died out too.   you said you were  shocked & entirely  skeptical at the same time.

you  took the news like one takes
a  secret. you thought on it a while.  you buried it in the backyard of your head.

you watered it, sung to it before bed  & like all things it grew.

to them, you said, quiet,  as to not break the still  black morning’s sloth.

just because we can’t  pray to them, doesn’t mean there lacks room for us to imagine hooves
against the wooden slats of a saloon, a person riding bare back


with one-handed confidence leading us
from temptation to temptation

& delivering us to a rotunda  of night sky, you said.

you wrote a prayer on a notepad:
unicorn,   tell us how all was placed on earth.


you burnt it in a candle.  you watched its ashes  be carried off to somewhere else. everywhere we exist

is a building waiting for us to
step out of,  & because we grow weary of listening for hooves at night,


in the morning, ivory glistens with dew
& because children stop dreaming in their beds  & later outside of them too, we all must


face our inevitable extinctions. the new  others will make tapestries of us then.
we will not be shown making shapes with arms & legs

nor eating pistachios in bed

but alive again, walking upright.  the visitors will say   how happy
they look, in the tapestry         where we are

chained to a pomegranate tree surrounded by a fence,  in a field of eternal celestial bloom

where the flowers know to open for moon, not sun.
those coming to visit  our tapestry will think we didn’t know the difference

between our serenity & freedom.   I wonder how they tamed them,

the visitors will say.   I wonder if  they knew

they were  the last of  something?   & right now as I think these things   in bed,
on some porch in somewhere montana  a house lamp dims

& the sky a broken yolk above it.

what are you thinking, you say.   no, don’t tell   me, you say, waiting  for me to
pull you onto my side of the bed

& the moonlight will make its attempt to pierce
through the curtains   while we both wait. 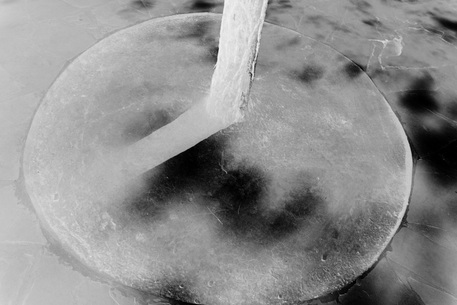 ﻿Keegan Lester is the winner of the 2016 Slope Editions Book Prize, selected by Mary Ruefle, for his collection this shouldn’t be beautiful but it was & it was all i had, so i drew it. He is an American poet splitting time between New York City and Morgantown, West Virginia. His work is published in or forthcoming from the Boston Review, The Atlas Review, Powder Keg, BOAAT Journal, The Journal, Phantom Books, Tinderbox, CutBank, and Sixth Finch, among others, and has been featured on NPR, The New School Writing Blog, and Coldfront Magazine. He is the co-founder and poetry editor for the journal Souvenir Lit. You can follow him on Twitter @keeganmlester, on Instagram @kml2157, or find out more at keeganlester.com.
﻿Ze Gao was born in China in 1992. He is a photographer, painter, curator, national senior photographer, and makeup artist in China. He studied fine arts at the Maryland Institute College of Art (MICA) and obtained an MFA in Photography, Video, and Related Media from the School of Visual Arts in New York City. He was also admitted into the Professional Teaching Materials for Students of Photography in Higher Education Institutions in China. His works have been showcased in many exhibitions in the United States, Europe, Korea, Singapore, and China.