It’s mid-April. A blizzard arrives with hail and sounds of chimes.

On her 80th birthday, my mother asked when I’d go home one more time.

Yesterday I rowed 10k in my single scull. Now the Mississippi groans under the ice.

A friend sent me “The Third Snow” by Yevgeny Yevtushenko, a poem from Siberia, a century old.

A blizzard is indifferent to space or time.

Via WeChat, my brother marvels at my house in St. Paul, how affordable compared to his 6 million Yuan hole on an island. He’s willing to forgo the breeze from East China Sea for a place in Minnesota freeze.

“Please don’t go back to China,” pleaded Gary Snyder, tears in his eyes. “You know you’re on their list, right?”

A brainstorm in soft simplicity. A debate if I should become a citizen after two and a half decades of wandering.

And robins know how to wait. They know how spring rides the cold front, how worms awaken the earth. They follow the 37° isotherm for their flight between Guatemala and Minnesota.

My mother tried many years to unlock the secret of Dao De Jing. She was allowed to step into the Way after she lost her sight at 73.

They follow the smell of snow and rain, the thawing earth, and worms’ vertical migration. When the blizzard blows them off course, they fly towards the sun, and follow its angled light to get back on track.

I reached the last stage for citizenship, twice, but chickened out after I did my fingerprints. I never showed up for the swearing.

Robins have an inner compass. It sits in their eyes, two free radicals spinning in blue light, two lovers, radiant with joy... this is their quantum coherence.

Their third eye through a blizzard, towards home. 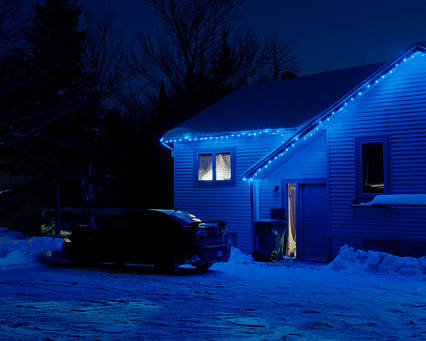 Wang Ping was born in China and came to the United States in 1986. Her publications include American Visa, Foreign Devil, Of Flesh and Spirit, New Generation: Poetry from China Today, Aching for Beauty: Footbinding in China, The Magic Whip, The Dragon Emperor, The Last Communist Virgin, Flashcards: Poems by Yu Jian, Ten Thousand Waves, and Life of Miracles along the Yangtze and Mississippi (AWP 2017 award for nonfiction). She won the Eugene Kayden Award for the Best Book in Humanities and is the recipient of NEA, the Bush Artist Fellowship for poetry, the McKnight Fellowship for nonfiction, and many others. Her website is wangping.com.
Laurence Hervieux-Gosselin was born in Montreal, Quebec. She studied scriptwriting and communications at Université du Québec à Montréal and has a BFA in Photography from Concordia University. She is currently an MFA candidate in Art Photography in the College of Visual and Performing Arts at Syracuse University. In 2018, she was a finalist for the Scotiabank New Generation Photography Award, and in 2014, she was a finalist for the Ideastap Photographic Award with Magnum Photos. Her work has been exhibited at Uqbar (Berlin, 2018), La Castiglione (Montreal, 2018), Burrard Arts Foundation (Vancouver, 2017), Monash Gallery of Art (Melbourne, 2017), dnj Gallery (Santa Monica, 2016), and The Old Truman Brewery (London, 2014).
Issue ten