​​I am already so cumbersome from the America in me,
and its execution of the body. I don’t dance unless I’m sloshed
to my eyebrows in fermentation. I don’t dance until
I’ve dammed the barrier between my pelvis and its estrangement
from pleasure. I do often roll my tongue, but only to flute
my lips and spit cherry seeds a respectable distance away from
me. For so long I wanted to be at least one of the following: a willow spine
and limbs allowed to drift without syncopation, or a manatee
that sailors escort to an ice skating rink. For those of you in the back
of your heads, that’s a skinny awkward sympathy or a fat
decorative allowance. I’ve lived in shapes I cannot muster the courage
to name because they are slanted and curved. An octagon
if you will, there, I said it. These false starts at angular, and these teases
at curves, these crops I’d rather burn than rotate, these hands,
I’ve laid hands, I’ve laid hands on myself when I could not for the foreign
life of me pull a line of rhythm from my scalp to my toes
without shuddering at my own reverberations. 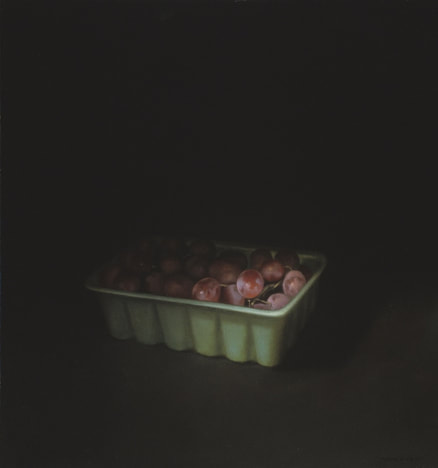 Xandria Phillips is the author of Reasons For Smoking (forthcoming from The Seattle Review), a chapbook selected by Claudia Rankine. She hails from rural Ohio where she was raised on corn and inherited her grandmother’s fear of open water. Xandria received her BA from Oberlin College and her MFA from Virginia Tech. Xandria is Winter Tangerine’s associate poetry editor, and the curator of Love Letters to Spooks, a literary space for Black people. She has received fellowships from Cave Canem and Callaloo. Xandria’s poetry is present or forthcoming in Beloit Poetry Journal, West Branch, Nashville Review, Gigantic Sequins, and elsewhere.
Chris Wright received his BFA from the Pacific Northwest College of Art and his MFA from Pratt Institute. He has taught painting at Pratt since 1999. Wright has taught with the Pratt in Venice Summer Program, Montserrat College of Art, the New York Academy of Art, among others. He is a 2015 fellow in painting from the New York Foundation for the Arts. His work has been included in exhibitions at the Affordable Art Fair, New York; Cal State Fullerton; and UMass Amherst. His work has appeared in New York Spaces Magazine, New American Paintings, and American Art Collector.